A film by António Cascais
Commissioned by WDR / ARTE
In the series Arte:Re

The pressure on Portugal's west coast increases from year to year: Especially in the north of the country, many Portuguese have been waging a desperate battle for years against the advance of the sea, which threatens beaches and coastal resorts. Every year, the environmental authorities have to abandon homes on the coast and relocate residents.

Arte:RE shows how people in Portugal are fighting against the progress of the sea and coastal erosion, for example the fisherman Vítor Cacheira, who has not been able to make a living from coastal fishing for a long time and who, as a city councillor in the town of Esmoriz, is therefore campaigning for a resettlement programme that provides safe housing for affected families.

At the beach resort of Furadouro, surf instructor and nature guide, João Paulo, sees his economic basis endangered. Every year there are floods here, triggered by tidal waves. Due to environmental sins of the past, the sandy beach is getting narrower every year. More and more apartment blocks with holiday homes have displaced the dunes.

Restaurant owner Abel Vieira, from the fishing village of Apúlia, fears that his centuries-old village could disappear in a few years. Many houses that were located directly on the beach have already literally fallen into the sea in recent years. Abel Vieira's restaurant, one of many located directly behind the dune, is also at risk - and with it many jobs.

The central government says it has the problem on its radar. They are trying to solve the problem by filling millions of cubic metres of sand or by building protective walls. Sisyphean work. The EU has made the fight against coastal erosion a priority and is supporting the Portuguese authorities financially. 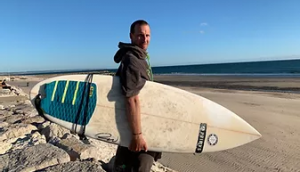 Our summer in Portugal - Through the crisis with surfboard and fado